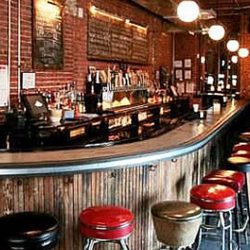 Barcade® is the Original Arcade Bar: a combination bar and arcade with a focus on classic arcade games and American craft beer. There are currently seven locations in New York, New Jersey, Pennsylvania, and Connecticut. All locations are owned and operated by four of the company founders; Paul Kermizian, Pete Langway, and brothers Kevin and Scott Beard along with a small group of private investors.
The original Barcade opened in 2004 in a former metal shop on Union Avenue in Williamsburg, Brooklyn. At the time, Kevin and Scott were working in graphic design, Paul in film and television, and Pete in advertising. Paul had just completed directing the feature film “American Beer”, a road trip documentary profiling the American craft beer industry, and the friends were spending time drinking craft beer and playing the classic 1980’s video games that lined the walls of Paul’s Williamsburg loft.
Those beer and game filled nights inspired the group to open a neighborhood bar focused on American craft beer and classic video games. They quit their day jobs, maxed out their credit cards, and began work on Barcade.
The friends did most of the construction themselves, keeping the look of the warehouse and garage that the space had previously been, and the bar opened in the fall of 2004 to immediate acclaim.
Looking ahead with plans for expansion, the company registered a federal trademark in 2007 for the name Barcade. In 2011 two new locations opened; one in downtown Jersey City and another in the Fishtown neighborhood of Philadelphia.
Barcade opened two more locations in 2014, both in Manhattan: on West 24th Street in Chelsea, and on St. Mark’s Place in the East Village. The sixth location, in New Haven, Connecticut opened in 2016. The seventh location opened in Newark, New Jersey in 2017.
There are currently two locations under construction in Los Angeles and Detroit and others in the planning stages including a second Philadelphia location and a second Los Angeles location.
Barcade began utilizing the tagline “The Original Arcade Bar” in 2015 as a way to distinguish itself from the hundreds of arcade bars which have now opened across the United States. Many of these arcade bars cite Barcade as their inspiration.
Barcade locations typically have a full bar with a focus on craft spirits and cocktails. The menu consists primarily of sandwiches and sharable plates with creative variations of classic pub food and regional specialties. The beer selection is only American craft beer, featuring local, regional, and national craft breweries, and only on draft so as to reduce waste and energy.
The video game selection is mostly from the classic period of the early 1980’s and ranges through the early 1990’s, although there may be titles as early as 1975 and as recent as the mid-2000’s in rotation. Most locations will have between 40 and 60 games on the floor. The pinball selection includes many current titles as well as classic machines from the 1980’s and 1990’s.
Barcade locations are certified green by the Green Restaurant Association, a national non-profit organization that recognizes and certifies environmentally responsible restaurant and bar operations.
In 2008, Barcade in Brooklyn was named one of the best bars in America by Esquire Magazine.
In 2013, Brooklyn’s Barcade was named the best bar in New York City by social media website Foursquare.
In 2013, Barcade in Philadelphia was named the best craft beer bar in the city by the television show Brew Dogs.